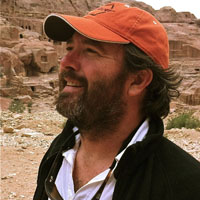 A native of Northern California, Bret directed his first film — a stop motion animation in 8mm — at the age of 9. A theater degree from the University of Arizona’s professional conservatory program led him to Chicago, where he studied improvisation under the late legendary Del Close for several years. After nearly a decade working for Chicago’s famed Second City as a creative director, writer, and actor, during which he toured 47 of 50 states and nine countries, Bret gave winter the finger and moved home to the west coast.

Bret’s background in acting and improvisation give him a unique insight into actor process, character, and storytelling. He excels in creating working environments that meld the technical demands of the filmmaking process with a sensitivity to the collaborative needs of an acting ensemble. He believes in a script-first process, informed by collaborative character development with the cast. As he’s fond of saying, “…if the scene doesn’t work, there’s no point in setting up the camera and lights.”

In 2011, Bret was invited to teach a year of film directing in the MFA film program at the Red Sea Institute of Cinematic Arts in Aqaba, Jordan, and returned the following year to teach in Amman, Jordan.